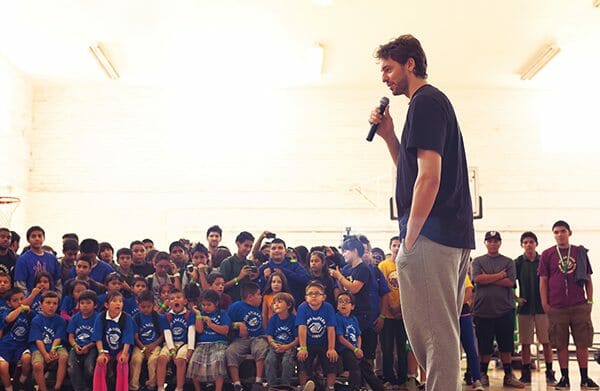 Before a group of screaming fans yelling his name, Pau Gasol asked them a simple question that sent them into a louder frenzy.

“Do you want to be on my team?” Gasol asked.

He uttered those words Monday at the Boys & Girls Club in downtown Los Angeles to mark the beginning of his self-named foundation.

As part of his initiative to promote a healthy lifestyle, Gasol and his brother, Marc, of the Memphis Grizzlies will coach two different teams in what’s called “The Healthy Competition 2013” running from June 10 through Aug. 2.

Using gifted Nike Fuelbands (retailed at $149) to track the teams’ progress, either Pau or Marc will have to shave their beard if their respective team loses.

It remains to be seen, though, whether the Lakers will become just as enthusiastic in keeping Gasol.

For the second consecutive year, the Lakers have offered no definite assurances on Gasol’s future in what would be the final year of his contract worth $19.3 million.

“It’s kind of like the usual,” Gasol said. “It’s nothing different. Nothing too exciting. The franchise is going through a little bit of a transition with Dr. (Jerry) Buss’ passing so that’s inevitable.”