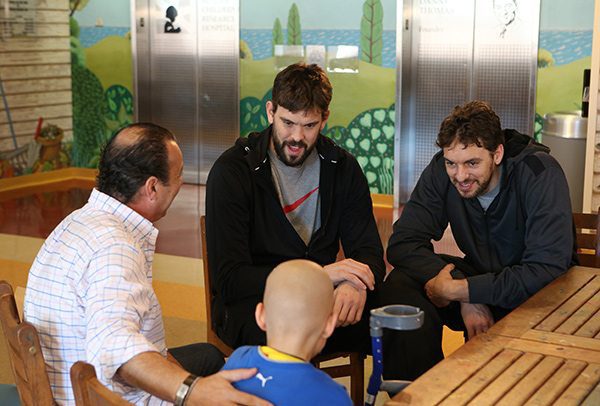 While in Memphis on Tuesday to play the Grizzlies, Pau Gasol joined his brother Marc for a visit to St. Jude Children’s Research Hospital.

The Lakers forward/center has a long relationship with St. Jude, dating back to his days with the Grizzlies (2001-08).

“I [visit] every year at St. Jude,” said Gasol on a telephone interview with The Times. “I do it a few times a year here at the children’s hospital in L.A.”

The Gasol brothers spent well over an hour with sick children as part of the NBA Cares’ #NBAGiveBIG program.

“I was able to meet around 10 kids and their families,” said Gasol. “We hung out and spent time with a kid [named Jorge, eight years old] from the Dominican Republic. His dad is from where we’re from, Barcelona, the Catalonia region.”

“We brought him a basketball and signed it for him.  We played magic cards with him and all the games,” Gasol said. “It was a very powerful experience.”

Philanthropy comes naturally to the 7-foot Spaniard. He’s an ambassador for UNICEF and has used his celebrity to help children in need.

“I have a passion to do it. It makes me feel also very humbled and it’s a very rewarding experience at the same time,” he said of his regular hospital visits. “Even though you see some very difficult situations and sad patients, and kids that may not live much longer, to be able get a smile out of them and make their day and bring them light during those times, it’s worth the struggle or pain that you might feel.”

Gasol will make his third trip of the season to Children’s Hospital Los Angeles on Thursday.

“I’ve been already twice this season, I’m very proud that I’m going back tomorrow again, before Christmas,” Gasol said. “I usually try to go for the holidays, because it’s a rougher time when kids cannot be at home and have to spend it in the hospital.”

Gasol seriously considered a career in medicine, like both his parents, before embarking on his career in the NBA.

“I would think it would be probably [too late] to get a degree and pursue a career,” said Gasol of his days after basketball. “What I’ll be able to do is continue to work with hospitals and institutions that do incredible jobs of work already and support and help them in different ways. That’s the way I’ll fill that passion.”

Marc and Pau Introduce Gasol Foundation at the Dinars Cambra